As Young Life moves FORWARD, it is propelled by a commitment to deeper discipleship, greater diversity and richer unity within the body of Christ. Naturally, this work brings us together with our Catholic brothers and sisters throughout the world. Right here in the United States, God is doing something truly special in the Northeast, home to more than 25 million Catholics. Inspired by the prophet Isaiah, Nathan Gunn sees Young Life and the Catholic Church working together to “rebuild the broken walls.” “If we can walk alongside each other to rebuild the broken walls of young peoples’ lives and restore our cities,” he recently said,  “then count me in.”

Nathan Gunn has served on Young Life Staff for over twenty years.  He lives with his wife Tammy and two sons in DeWitt, a suburb of Syracuse, New York.  For the past ten years, he has partnered with Holy Cross Church, a local parish that shares the mission of Young Life in a Catholic context.  While Nathan serves as the Associate Regional Director for Young Life in Central New York, his ordination into the permanent diaconate of the Catholic Church in 2016 provided a quantum leap in his ability to build bridges between Young Life and Catholics today.  Serving as Deacon within the Catholic Church places emphasis on proclamation of the Gospel, service and solidarity with the poor and those in need while also placing Nathan on the altar for much of Catholic liturgy.

Young Life and Holy Cross’s shared ministry and mission have allowed them to have a deeper impact on middle school kids through Wyldlife while also taking over 600 kids and adults from their community to rural El Salvador in a shared mission experience.  This has led to the start of Young Life ministry in El Salvador along with a host of other blessings to Young Life and the Church.  Each week, more kids than ever hear the Gospel of Jesus Christ through the unity and cross-pollination that exists between Young Life and Holy Cross as leaders and adults work together to reach kids.

Starting in January 2017, Nathan began to work formally in YL-Catholic Relations with a focus on the Eastern states.  The fruit of Nathan’s work has already provided a wonderful witness to his ecumenical calling. A relationship is being built with the Springfield Diocese of Massachusetts that could have major impact on the quality and depth of youth ministry in the entire state.  In late January, YL staff manned the first-ever Catholic Confirmation Retreat at Lake Champion and the feedback from kids and adults was enormously positive.  With a Catholic population numbering in the millions within a 3-hour radius of Lake Champion, using this property as a venue for Catholic retreats is both good stewardship and an amazing opportunity for unity and collaboration.

The Catholic Initiative may be one of the most important things we do here in Greater New York. It is said that Long Island, almost 3 million people, is 80% either Catholic or formerly Catholic. That’s a lot of people. Jersey, Connecticut, the city – particularly the immigrant population – are all hugely Catholic. I couldn’t be more excited about Nathan and his leadership in the Eastern states.

At the heart of Young Life is the desire to see every kid hear the Gospel of Jesus Christ through the means of a trusting relationship with an adult.  As we begin to look Forward in Young Life, engaging with like-minded Catholic adults who share our mission and dream of reaching kids is at the forefront of Nathan’s calling and passion. Please help me welcome Nathan to the Catholic Relations team and celebrate his work of bridge-building in the kingdom! 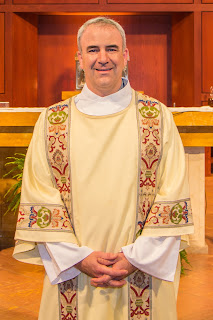 
Nathan can be reached at gunner721@gmail.com.
Posted by mhavercamp at 7:38 PM

Thanks so much for your input. I pray that this dialogue may be a blessing to you personally and to the ministry you exercise in Christ.